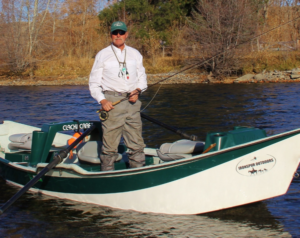 Ryan is a Washington State native and has fished the waters of this great state since the 1950’s. Ryan’s interests have varied from trout fishing the lowland lakes and rivers, to backpacking and fishing the high lakes, to salt water fisheries, and steelhead on the coastal rivers.

In the 1980’s Ryan was introduced to fly fishing while guiding hunting trips for a lodge in Montana and has been working on perfecting this skill since then.

He became a Kittitas County resident in 2013 and now calls the Upper Yakima River his home waters.  Ryan began guiding hunters and anglers in 1984 and has done so in four Western states, he currently focuses his efforts on guiding fly anglers on the Yakima River system. One of Ryan’s greatest passions is to help others experience and enjoy the wonderful outdoors that Washington state offers.

You will be re-directed to NOAA's website in a new tab for this info.